On Tuesday. the Weather.com prediction indicated a couple of inches of snow coming our way, which was fine because we were headed south anyway, and it was, after all, just a couple of inches. But by the time we woke up around 5:30 Wednesday morning, there was already a four-inch coating of snow and it was still coming.

It made packing the car a bit difficult, and slowed us down for the first 20 miles or so, but by the time we reached Rochester we were out of the snow and into the rain. I'm sure there will be a lot to clean up when we get home, but at the moment I don't care so much because we are sitting in New Jersey on a beautifully sunny day visiting with family.

The trip down, always long, was marked by one little bit of drama, sort of. We started hearing disturbing noises coming from Karen's car. With over 170,000 miles on the Subaru, noises can mean anything, or nothing. It turns out, though, that the noise was nothing but a plastic mud shield that had come loose and was brushing against the tire. Drama over.

I'm loving the combination of the Internet and portable computing and digital cameras, which allow we to post pictures and update this blog even when I'm not home. We've also been able to keep up on the status of snow in our area, not just through weather sites, but using a Web cam that's pointed at Wolfeboro Bay so that I can actually see how much snow is on the ground (on more accurately, on the docks, where it won't have been shoveled or plowed).

I just wish I had a Web cam pointed out my front window, so I could tell if the New Durham plow truck had left a pile of ice in front of my driveway.

I guess some things will just have to remain surprises.
Posted by Gordon Brooks at 12:19 PM No comments:

The last three weeks have been a blur of activity. There were six outstanding performances of Little Shop of Horrors, a short-term return to work for me, interspersed with den and pack meetings, appointments, and family outings. A chance to breathe? Well, just for a moment.

The play is done, sadly, but I couldn't have sustained the schedule for another week. I still have three or four days more at the temp job which has me commuting to Dover, again. And the den and pack meetings are still ongoing, along with, starting today, skating lessons.

The kids have also been having friends over. Yesterday William had a couple of his fellow scouts over to work on earning their chess belt loops and pins. Danny joined in too, and Thomas helped out, giving pointers. Before the boys went home, we made French bread pizzas with them.

Tom and I played a couple of games later in the evening, and we each won one. I think there will be some more chess playing in the Brooks household in the months to come, especially now that all three boys know how to play. 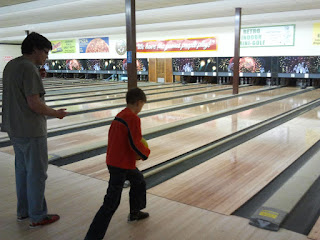 Today was especially busy, and especially fun. We did a family outing to Funspot to play a few video games and bowl, which we have not done in a long time.

At first, it was just Karen and Thomas and me on the lanes. And then after the boys had gone off to play some games, they joined in.

The younger two played their first game without the benefit of bumpers (I told you it had been a long time since the last time we played). Thomas was the high-scorer today. Here was the final score display: 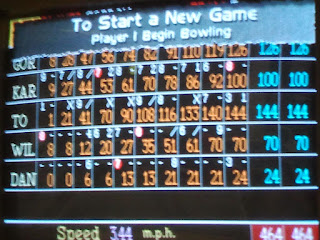 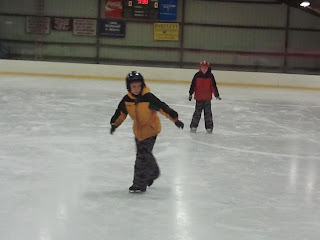 We had to be out of Funspot by around 3:30 so that we could get some dinner and get back to Wolfeboro by 5:15 for the boys to start skating lessons. They will be doing that for a couple of months, every Sunday evening, which means that for the first time since they started scouts, the skating will not interfere with pack meetings the first Tuesday of the month.

And now there is the end of Daylight Savings Time. It is supposed to give us an extra hour to sleep, but boys' body clocks don't know that, and they got up early. And now they will be out of whack with the clock for at least a week to come. I won't be spared either; I'm sure I'll be waking up in the morning around five without any chance of going back to sleep.

Well, don't get me started.

Once the job in Dover is done (notice that I avoided saying "Dover is over"), things will calm down a bit. Of course, I'll still be looking for work, and Thomas is looking for work as well, so who knows what havoc will be wrought on our upcoming schedule. The best I can do is to keep my calendar up to date and take it a week at a time.

Posted by Gordon Brooks at 8:38 PM No comments: