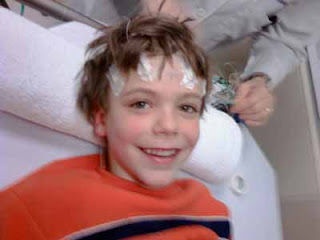 Today Danny had a sleep-deprived EEG, which means that he had to stay up until midnight, get up at four, and spend a couple of hours around eight having electrodes stuck to his head.

Karen got the duty on that one while I was at work, though I left early to take care of some paperwork.

To add to the excitement, they had a power outage at school today, which meant that William got out early. He spent an extra four hours in day care.

And then, when William and I were on the way home (Danny was already home with Tom, and Karen stopped to buy some groceries), I blew a tire and had to change that. Karen picked up William on her way home. Meanwhile, I discovered that my compact spare is a complete wreck from rust! I crept home with it, but the van won't be going anywhere tomorrow until I can take care of that tire.

Luckily, Tom has tomorrow off. Unluckily, it will be raining. Oh joy.

Karen and I are also sleep deprived, so that ends this entry.
Posted by Gordon Brooks at 9:15 PM No comments:

The two things I seem to have the least time for lately are writing and sleep. I had intended, now that I've changed from a row of pictures, most of which haven't changed in ages, to a single daily picture, to include the latest pictures with my blog entries so that I could more fully describe what was happening in them, and so the pictures could illustrate what the heck I was talking about in the blog.

But in the past couple of weeks I haven't had much time for blogging or for pictures. It would be easy to blame it on the play I'm in, but that's probably unfair to the play, and besides I don't want that to be true since I start rehearsals on another play in just a few weeks.

But there is a lot going on with the house, upcoming spring and (all too soon) summer vacation plans, and lots of paperwork that seems to all converge on April (taxes, yes, but lots of other things have to be submitted around the same time).

But we'll see what happens after the last show on Sunday. Perhaps with three weeks with no rehearsals and now performances, I'll manage to do a little catching up.
Posted by Gordon Brooks at 10:35 PM No comments:

It's been Hell. Well, Hell Week, actually, our affectionate slang for the final week leading up to opening night, during which we rehearse intensely every night for six straight nights, followed by two nights of performances. Since life does not stop for theater, most of us don't get a lot of sleep. And so some things have to wait. Like TheBrooksBunch.com.

But opening night is done, I slept for about ten hour last night (without Karen, who is in New Jersey with the boys for Easter), and I've rested up, sort of, for the second night on the stage. That is, if you call hanging sheetrock on a ceiling resting up. But that's another story.

Since there is no performance tomorrow, only auditions for the next show, I will have the time to spend time on our long-neglected Web site, adding pictures and rearranging thing a little for your viewing pleasure.

Now, though, I need to grab a quick dinner and get myself down to the theater for another show. More tomorrow.

Lots more.
Posted by Gordon Brooks at 5:43 PM No comments: