Karen finally got her car back. I never realized before how much I depend on having a car here, even without a regular job to go to. The number of times I had to take Karen to work and pick her up (over 20 miles away from home) because of kids' appointments, or mine, took me entirely by surprise. But we are, finally, a two-car family again.

And just in the nick of time, too. Thomas is staying with us for awhile. His rooming situation in North Conway just sort of went away, and we are helping him get around to find a car (he's buying one in the next couple of days) and an apartment (which could take a little longer; the rental housing market in North Conway is a bit sparse).

It was also in time for a special treat for Danny. Karen works for Lowes, and they happen to sponsor a NASCAR car, number 48, driven by Jimmie Johnson. Karen's boss gave her tickets to the race, and Danny and I went down to Louden together. 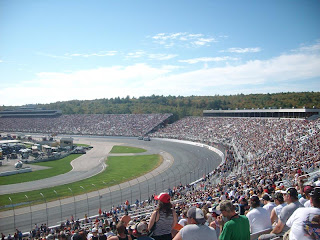 Danny found it very exciting, although I was fairly deaf after the experience. NASCAR puts the loud in Louden. We couldn't stay for the whole 300 laps, because I had rehearsal and had to get home to feed everyone and get the boys ready for school the next day, but Danny was getting a little tired from all the noise and heat anyway, so he wasn't upset about leaving.

Ah, yes, the heat. After having frost warnings a couple of weeks ago, we're now having days in the 80s with high humidity. Welcome, folks, to the New Hampshire Weather Roller Coaster. Those prone to motion sickness or arthritic attacks during temperature changes should probably avoid riding. As if that is an option.

The weather certainly played a role in William's weekend. He was off camping with the Weblos Scouts, and got rained on and bathed in the humid air. And he had a wonderful time. Sorry Karen couldn't go with him this year, but her work schedule didn't permit. I'm hoping to get a picture from the Den leader tonight, and I'll post it in the daily pictures if I do.

Today will be a day of making arrangements for Tom to get his car (pictures of the car soon, too), and of attempted carpentry. My carpentry skills are the stuff of legends. That is to say that they don't exist in real life.

Still, I'm plugging away, trying to get our downstairs bathroom put together, as part of a larger two-week project to prepare the basement for William's birthday party, which he will be having at home for the first time. We already have a huge tube-type TV in the basement that Thomas got free from a friend who didn't have room for it (and it's too big for our living room upstairs; in fact I don't know if I could even move it upstairs). We're going to hook up the video games to it and let the kids play down there.

However, we've got a lot of stuff that's accumulated down there. So there's actually a lot more of cleaning and getting rid of stuff before the party than there is of carpentry and the like. And that suits me fine. I'm better at moving and cleaning stuff then I am at building stuff.

I'll let you know how it all turns out. With pictures, of course.
Posted by Gordon Brooks at 10:05 AM No comments:

Here's the math: two adults, two children, and only one car. On the other side of that equation is a mass of confusion and a lot of extra driving around. But that's the situation at the Brooks household until sometime next week. Karen's car is in the shop for major repairs before it can pass its annual inspection, and until then we are a one-car family.
And, of course, it's that time of the year when the boys start up scouting and clubs, and have school events to attend and appointments with doctors. It's a good thing I have a good calendar program.
The boys are settling back into the school routine, and so am I, making sure homework gets done, backpacks get packed, dinner gets on the table, and children get to bed.
But it will be a lot easier when we have Karen's car back.
Posted by Gordon Brooks at 8:52 AM No comments:

I Love You, Tomorrow

Tomorrow is the first day of the school year for Daniel and William. I can hardly contain my enthusiasm. I love my children, but thirteen weeks of having them at home has made it very difficult to get anything done, and this is one time in my life where I really need to get things done.
Of course, I'm not looking forward to getting up at 6:30 every weekday morning, something I have only had to do a few times all summer (after I finished at Measured Progress, for which I had to rise at 5:15). But it's a small price to pay for the extra time.
Tomorrow is also one of Karen's days off this week. For two consecutive days, I have a day at hone with my wife without the kids at home. Now there's something to celebrate!
Tomorrow is also the day that we cut off out landline phone service. Aside from being expensive, it wasn't of very high quality. In the past two weeks we've been calling out exclusively on our cell phones using the house's wireless Internet connection. The calls are clearer than with the directly-connected Vonage device, and the phone itself is of better quality, and with better range in the house than our cordless phones have been.
Also, in testing out the concept of only using our cell phones we've discovered something else: hardly anyone calls us on the phone. A lot of our communication is by email.
Tomorrow we also take a couple of big steps in the process of changing banks. This is a lot more work than getting rid of a telephone number, with all of the automatic payments that are linked to our old accounts. But we just couldn't afford our bank's ever-increasing fees (which went with ever-decreasing customer service), and so we've joined a credit union.
Yep, lots of changes in the Brooks house starting tomorrow, and I'm ready for it. Bet your bottom dollar!
Posted by Gordon Brooks at 12:09 PM No comments: