Oh, the Weather Outside Is ... Just Weird!

As I write this, the temperature outside is ten degrees. Fahrenheit. But later in the week we are expecting it to climb above freezing, and we may actually see a little rain. At times like that it feels more like late Autumn than mid-January. But not today. Today it is undoubtedly Winter. 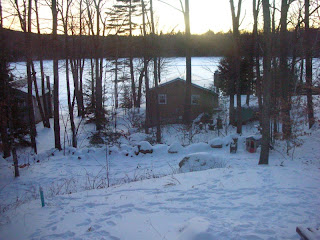 Snow finally came on Thursday morning, just in time for school to be cancelled. William was disappointed, because a day off school also meant the cancellation or postponement (we don't know which) of our Book Talk Club. This month's book was Jerry Spinelli's wonderful Stargirl, and we were both looking forward to discussing the book with our friends. Perhaps we'll get the chance soon.

There was still ice on the roads Friday morning, so school was delayed for two hours so the roads could be made safe for the busses. In an area as spread out as ours, we rely heavily on the busses. If the busses don't run, there is no school.

There wasn't any school for Danny anyway. He woke up with a stomach bug. But he was over it enough by Saturday to go out and play in the snow. Yesterday was cold, but not bitterly so. 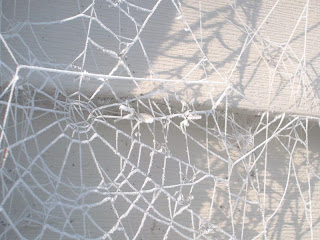 Today is another story. We don't expect the temperature to climb above 20 today, so we (with the exception of poor Karen, who had to work) are huddling inside with the heat turned up until things outside  warm up to, say, freezing or so.

We're planning to make some brownies, maybe a batch of cookies, and something baked for dinner tonight. Anything to make the house feel warmer. Eating the extra calories doesn't hurt, either,

This frost-covered spider web greeted us as we were saying good-bye to Karen this morning, and she insisted that I take a picture, and so I insist on sharing it with you. Especially after freezing my fingers off to get it.

For the most part, I have not had a big problem with the weather in New Hampshire in the decade that I've lived here. But on a day like this, California sound pretty good. Especially when I see that it is currently 46 degrees in LA, with an expected high of 62. I normally have the thermostat inside my house set to 62 this time of the year, so that sounds ever so comfortable.

But California is not in the cards for us this Winter, nor Florida, nor Hawaii, nor any of the other warm spots we dream about on cold days like this. But Spring is only about nine weeks away, and although the beginning of Spring here is far colder than the middle of Winter in California (or Florida or Hawaii—oh, stop, I'm just torturing myself), the contrast makes it feel downright tropical.

In the meantime, we give our daily thanks. To the inventors of Polar Fleece.
Posted by Gordon Brooks at 11:16 AM No comments:

The new year rolled in without much fanfare at the Brooks household. No one was out partying, and no one even watched the New Year's Eve specials on television, partly because we don't receive broadcast television, but mostly because everyone in the house with the possible exception of Tom, was asleep.

Karen got her New Year's Eve kiss from me sometime before 11:00 (and again in the morning, for I hate to pass up any good opportunity) and the kids went to bed pretty much on time.

Not that the day was completely uneventful. We had originally planned to go to the Museum of Science in Boston, but getting everyone together with three of us still under the weather proved to be a bit too much, so we opted for a day in Concord instead. We visited the New Hampshire Historical Society Museum for a few hours, then had a wonderful early dinner at the Longhorn Steak House.

We also got some new shoes for the kids, some new pants for me, and discovered a rather large Dollar Tree store that's only recently opened. What a bunch of party animals we are!

2012 promises to be an eventful year, if only because uneventful years just don't seem to happen in the land of the Brooks Bunch. I'll be turning 55 this year, which qualifies me for senior discounts at Dunkin' Donuts, the local grocery store, and the state museums. I don't know how I feel about this, but that doesn't mean I won't accept the discount.

By the fall of this year, William and Daniel will be back to attending the same school (our elementary grades are split between two schools), but it will only last for a year. They won't attend the middle school together at all, and they will only be together in high school after William has already been there two years. So I should enjoy the brief convenience of only having one school to deal with while it lasts.

This year I am laying out of the theater, at least so far as acting and directing go, though I may lend a hand in the booth at some point. But I need the time to work on film and book projects, and a new business that Karen and I are starting up because, well, at 55 it has become nearly impossible to find someone who wants to hire me.

And, of course, 2012 is the year the world comes to an end. Oh, wait, did I read that right? Didn't that happen last year (or was it the year before that)? No, I see, it's just that the Mayan calendar is coming to an end, on December 21st. Nothing that has any personal significance for me, of course, but I think I will celebrate anyway, because it only happens every 5,126 years. Makes our little millennial celebrations look a bit paltry, doesn't it?

And so I'm off to put the last polish on my goals for the new year, about as much ritual as I'm up for. But I leave you with the words of Ogden Nash:

Duck, here comes another year!
Posted by Gordon Brooks at 10:16 AM No comments: