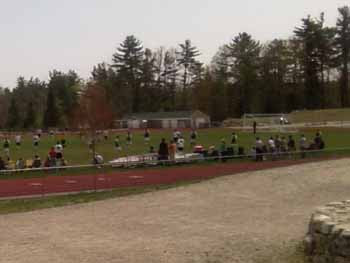 Beautiful, sunny, warm day to start the month of May, so the boys and I decided to go out. I was going to take the bikes, but William's has a flat in front and for some reasons I can't push air through the valve. I'll have to fix that another day, though, as I couldn't bear to waste time repairing bicycles when there was such great weather to take advantage of. 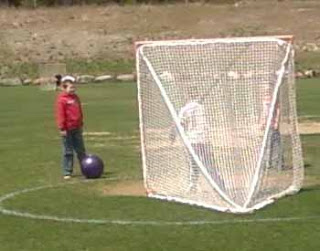 I bought some Lunchables at the store and we went to the park called the "Nick." There was a soccer game in progress, so William and I watched that while we ate. Danny was watching the kids play on the equipment. But soon after lunch was over, William and Daniel and some other kids had put together their own kind of soccer game (with a big inflatable ball and lacrosse goals on another field) and that kept them busy for more than an hour. 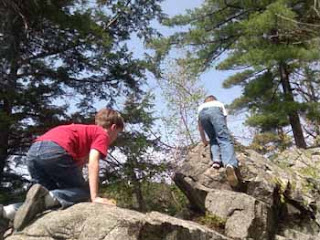 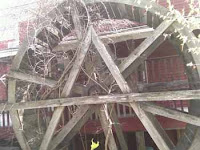 Despite all that they had enough energy to go for a walk with me along Bridge Falls path. The boys climbed some rocks, and we walked along the path from the parking lot next to Foss Field to Route 109, next to Blacksmith Printing. Rather than turn back, I decided to turn onto Route 109 and walk past some of the buildings there. Danny noticed an old, broken-down waterwheel next to a currently vacant building (which used to house, among other things, a Moe's sandwich shop), and some broken tree stumps in the river bed behind the building.

When we got back to Back Bay, we ran across some scouting friends, and it took me awhile to pull the boys away so we could take care of grocery shopping and get home.

Tonight we are going to stay out late to see a wonderful group of young people stage Shakespeare's "The Comedy of Errors." Perform It! is a company of home-school students who put on a different Shakespearian production every spring. The last one I saw was "As You Like It," and I was enthralled. Also lucky enough to have since shared the stage with a couple of actors from that show.

Speaking of matters of the theater, I begin rehearsals this week on "Unnecessary Farce," It's going to be a lot of fun, partly because the play is amazingly funny, but also because the cast is made up of old friends, people I've performed with in other Village Players productions. I'm really looking forward to it.

But as for today I have lots to do before we go out, and so it's time to sign off.
Posted by Gordon Brooks at 5:51 PM