Not What I Had In Mind

I was all pumped. A day alone with my wife, a rare and delightful treat. I expected snow, as forecast, but not so much that school would get called off. The phone range at 5:30 in the morning, announcing a two-hour delay. Not surprising. Then I looked at the window. 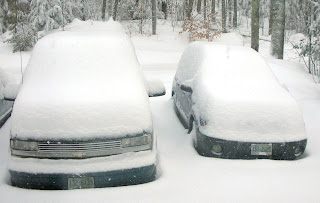 Sure enough, the phone rang again an hour later, and school was cancelled. To top it off, Thomas called in late because of the snow, and Home Depot decided to call someone in his place and give him hours on another day. So instead of an empty nest for a day, we had a full house.

The day was not without its highlights, two being the delightful cookie/brownie combination that Karen whipped up and a trip to a local cabinet maker to have the initial cuts done on the Cub Scouts' Pinewood Derby Cars. But those came at the expense of a lot of shoveling (and a backache to go with it) and a lost opportunity for some premium time with Karen. Out next opportunity to have the house to ourselves comes February 20th. If it doesn't snow.

And even these chances to spend time alone are an anomaly caused by the need to shorten the school schedule to accommodate construction at the high school. Next year it will be the same thing as always: when I'm off, the kids are off. And Karen's schedule is anyone's guess.
Posted by Gordon Brooks at 9:15 PM