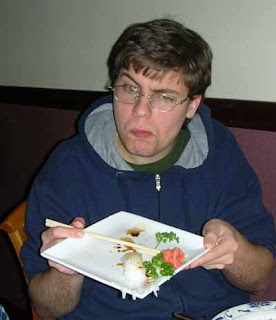 The gentleman motioned us to a "Staff Only" door and led us down a corridor. I thought he was showing us a shortcut. But he knocked on a door and asked the young lady who opened it if it was a good time to take a tour. And so we got to see the animals close up! Danny was thrilled! It was a great way to end a very exciting trip.
Posted by Gordon Brooks at 10:23 PM No comments:

A Night In the Museum 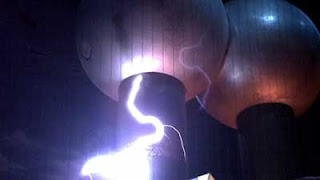 When I woke up yesterday morning, there were two gigantic spheres looming over my head in the gloom. About an hour before I went to bed, those spheres had been issuing powerful sparks that lit up the room. We were sleeping in the shadow of the world's largest air-insulated Van de Graff generator.

It was part of an overnight trip to the Museum of Science in Boston, with the Cub Scouts. The generator is the centerpiece of the museum's demonstration on lightning, and was built about 80 years ago by Robert Van de Graff himself. That was only the most spectacular of many wonderful demonstrations and hands-on activities enjoyed by the Scouts between 7:00 Friday night and 11:00 Saturday morning.

We all started out with a show on forensic science, and scientific observation in general, and then we split into groups for hands-on workshops. Danny and I went to a demonstration of optical illusions, a favorite topic of mine. After that we were free to explore the museum for awhile, get a snack (Oreo Dippin' Dots), and choose other hands-on workshops. Danny wanted to do electric circuits, though he got sidetracked with so many of the displays that he didn't get to do much with electricity before it was time to go see the live animals, something he was even more interested in. 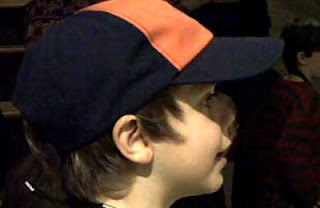 Danny met a white ferret, a frog, and a lizard before it was time to go off to see the Lighting show, and then go to bed. 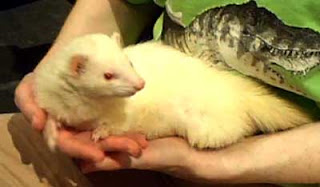 Bedtime wasn't until midnight, and wake-up call was 6:45, so there wasn't a lot of sleeping involved. After we went to our cars to stow our gear, we had a light breakfast and then saw another fabulous show on how your senses can be fooled.

The last official event of the overnight was an Omnimax film about the coral reefs, and then we were free to explore on our own, until we ran out of steam. Amazingly, we made it for another four hours, visiting some of Mom and Dad's favorite exhibits. We drove back to Rochester to pick up my car, and then had dinner at Johnson's in New Durham (cook after all that? no way).

But I think I need a nap.
Posted by Gordon Brooks at 10:54 AM No comments:

The Race Is On, Again!

I find it interesting that the picture that cycled back was of William working on his Pinewood Derby car, since today was the district race that both William and Daniel qualified for during the pack event. This time, Daniel came in third for the Tigers in a series of races that was so close that they had to run the three top cars for an extra race to determine the winner.

William's car was having difficulties from the very start, and we think it was because something happened to the axles. We'll give it another try next year, though. The two cars are being retired to the trophy shelf.

After the Derby, we stopped by Karen's store to show off the participation medals. Danny will also be getting a trophy to add to his collection, but it will be presented at the pack meeting.

When we got home, we turned around almost immediately and went back out to attend a benefit dinner for the pack, held at the local Masonic Temple and sponsored by the Oddfellows, we also did the food. Pork loin, roast potatoes, carrots, and applesauce. Mouthwatering! And a brownie sundae for dessert.

Set all the clocks ahead; the computers should roll over at the official hour of 2:00 a.m. I was just getting to enjoy walking out to my car at 5:45 in the morning in the light. Daylight Savings Time will kill that luxury for several weeks. I can't believe that we set the clocks ahead for more than half the year now. What exactly is the point of that? Ah well.

Tonight I have been downloading some sheet music so that I can start getting my piano skills back up to par. I've found an old favorite from my childhood lessons, a Beethoven sonatina, and a couple of pieces I've always wanted to learn, including Fur Elise (Beethoven again) and George Cobb's Russian Rag, based on Rachmaninoff's  Prelude.

This was all prompted by the purchase of a new, heavy-duty keyboard stand for my 37-pound electronic piano with weighted keys. My old stand was too shaky with the heavier keyboard; the new stand holds the piano and my synth, so I hope to be playing a lot more music than I have for the last several years, and maybe even composing some.

Meanwhile, I'm playing carpenter on the house, a skill that I can't even say is rusty, since I never acquired it in the first place. They say the necessity is the mother of invention, but for me learning carpentry is the mother of all headaches. And backaches. Oh, and shoulder aches.

Just thinking about it makes me want to take some ibuprofen and get to bed.
Posted by Gordon Brooks at 11:49 PM No comments:

Today William and Daniel did their skating shows, and end-of-season tradition for ice skating at the Pop Whalen Arena in Wolfeboro. Both boys are skating well, but Danny is the one who's made the really big leap. The last time he tried to skate, he spent the whole time on his hands and knees, afraid of falling. This time, he started right off learning how to get up properly after a fall, and never looked back.

Sure, he falls--they both do--but he gets right back up and keeps going, and his skating is worlds better than before. Both boys feel very comfortable on the ice, and the biggest problem we have is getting them to come home at the end.

Our Spring-like weather continues, without all the rain, and the snow is already starting to disappear. Mud season has arrived early in New Hampshire, and I, for one, am glad to welcome it. We have a lot to do on our house, and it's going to be a lot easier when the weather is warmer and dryer.

Right now I have to get myself ready for bed. More to come this weekend, along with some promised changes in the way I do pictures.
Posted by Gordon Brooks at 10:33 PM No comments: