Today's picture may look a little familiar, like something you saw, oh, a month ago. That's the way it's going to be for the rest of the week, most likely, as every night will see me at the Village Players getting ready for the opening of "Unnecessary Farce." We open Friday, and then I finally get to catch up on sleep, and a few other things, on Saturday. One more show Saturday night, and then I get three days off of theater work.

I'm thinking of posting a gallery on Picasaweb entitled "What You Missed," including pictures of Danny's latest lost tooth and a few other events I have not had the time to write about. We'll see how much of that happens, because there's a lot that I've missed, like work on the house and preparation for an upcoming trip to the West Coast.

But it all has to wait until after opening night. because up to that time, I'm flat out.
Posted by Gordon Brooks at 1:50 PM No comments:

Was out getting some things out of my car—lunch box, planning book, mail—when the first fat raindrops started. Right after I got inside with the goods and the dog, it started pouring, accompanied by bright lightning and very loud thunder, right on top of us. I was reading with Danny when the loudest part of the storm hit, and I kept telling him to speak up so I could hear him over the thunder.

Danny was funny. He wasn't scared of the thunder but he was worried that it would keep him up all night. I assured him that it would not last long. Half an hour later, it was over.

Now this is the New Hampshire I remember from a decade ago. A hot day, mixed clouds and sun, and then and intense, short storm in the afternoon or evening.

I have more stories to tell, with picture, but not any time to tell them until either tomorrow or Thursday, depending on theater happenings.

Bear with me; this show has been more difficult than many of the others, both in its complexity and my ability to keep up on it. But we'll be opening soon and then things will calm down.

A little.
Posted by Gordon Brooks at 9:00 PM No comments:

Last week Karen and the boys had a chance to go camping at Hamonassett Beach in Connecticut. Having work on Friday and rehearsal on Sunday, I was only able to join them for the day on Saturday, and not much of that since the round trip involved about ten hours of driving. But I had fun fishing with Danny and William and had a wonderful dinner at Fish Tales, which I think is in Madison. Pictures, unedited as of this writing, are on a new Picasaweb Gallery, which can be found from the link on the left of the main page.

This past weekend was, of course, Independence Day weekend.  Saturday was spent doing what is often done on summer weekends: taking care of the house. In this case, I was assembling our new weed trimmer (I've given up gas for electric; less power but also less noise and hassle) and trimming the weeds in the back yard.

William and I also managed to get on on the kayaks while Karen and Danny did some swimming. 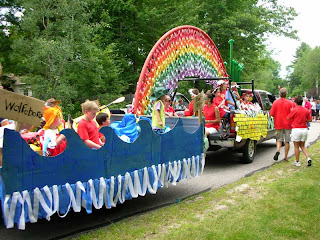 Sunday was not only Independence Day but parade day in Wolfeboro. The Children's Center fielded this float, which William and Daniel rode on. Dear old Dad walked behind, taking pictures and keeping an eye on children, and not realizing just what horrible shape my body is in. The walk was only a mile and a half, but that far on the pavement gave me some charming aches in the legs this morning. 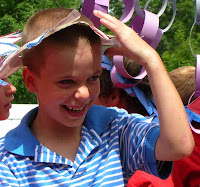 Today is a family day, although I do have some work to do on my car, which is overheating, and our grill, which has never actually been used. We had some trouble with it when we bought it and never managed to get it working before the move. But today's the day. There I go being the handyman again!

Karen and the boys went to sign up for swimming lessons this morning--for the boys, that is, Karen swims just fine--leaving me some time for this and for posting pictures. They'll be back soon, though, so I had better get back to work!
Posted by Gordon Brooks at 12:20 PM No comments: