Well, it's all done. Karen and I are trying to relax while the boys play outside and work off some of the energy they got from the Pinewood Derby.

Danny didn't win any trophies this year, and I'm glad to see he's not too broken up about it. I said yesterday that the most important thing was for the scouts to have fun, and they certainly did. They also created many amazing cars. There was a Duracell battery. There was a coffin with a skeleton. A school bus. And even a large purple hippopotamus. That last was not only an exceptionally cool creation, but speedy as well; it won third place overall.

Big surprise for us was William's car, which placed first in his rank. That means that, for the second year in a row, William qualifies for the district races. It never ceases to amaze me when, poor carpenter that I am, I help one of my boys create something that actually works. I hope it doesn't raise Karen's hopes for my work in the house. Sigh.

Looks like the weather will be treating us better for awhile; some cold days ahead, but nothing like we saw last week, and not a lot of snow, which is good because I haven't really caught up with the snow that's already on the ground.

Only about a third of the way through winter and I'm already looking forward to spring.
Posted by Gordon Brooks at 5:01 PM No comments:

Tonight Karen was home for dinner, and we made french bread white-sauce pizza with chicken and pineapple, with hot fudge sundaes for dessert. Between dinner and dessert came work on our Pinewood Derby cars, which will race down the track tomorrow; all we have left to do is lubricate the wheels, which will have to wait for morning because we can't find our tube of graphite.

I'm trying to keep Danny from getting his hopes too high. He was last year's runaway winner in the local pack, and third place in his age group in the regional races. It was all a matter of luck. From what I have been able to tell, winning has more to do with axle smoothness and wheel alignment than with car design or, well, just about anything else, and making a Pinewood Derby car is not exactly precision machining. I'll just be happy if the boys' cars make it down the track through seven or eight races with the wheels intact.

Of course, the most important thing is for the scouts to have fun, and if last year's event is any indication, there will be plenty of fun to go around. And anyway, it's someone else's turn to be the winner. Karen will be with us, having actually gotten the weekend off. There's work to do at home, of course, but we will find the time for fun as well.

This week brought report cards. William's report was even better than we expected. He's really flourishing in school this year, to the point of having been invited to the morning Math Club by his teacher, which is a honor reserved only for student who excel not only at math, but at their other work as well. We are very proud.

Danny still has some work to do, but we're very proud of him, too. He's gone from actually crying at having to read to someone who reads for fun, even reminding us of Grandma Pat, who often went around reading the signs around her aloud. And Danny is also very adept at math.

So my boys are doing well. I'm not saying it's all smooth sailing—it would be almost scary if they behaved all the time at eight and ten—but it's nice to see them making the effort.

And it's especially nice when all four of us are together for the weekend. It's all too rare a treat.
Posted by Gordon Brooks at 10:11 PM No comments:

Almost Under the Weather

That is to say, the pile of snow left by my snow removal efforts is almost taller than I am. By tomorrow afternoon I suspect it will have exceeded my height by at least a few inches, since we are getting yet another snowstorm starting at about 3:00 tomorrow morning and lasting nearly twelve hours.

It will create, I'm quite sure, the third snow day for the school in the last two weeks. Meaning that my children will have school on a Saturday once in February, and again in March, and again, it seems, in April.

It also means that I will be spending most of the morning worrying about my wife getting safely to work (good thing she's such a careful driver or I'd be a nervous wreck), and nearly all of the afternoon blowing and shoveling snow. Fortunately I won't have to worry so much about Karen getting home; the storm should have passed and the roads should be mostly clear by the time she gets off work.

And then there's the weekend, which won't bring more snow, but will bring truly frigid temperatures, with one night predicted to drop to 14 degrees below zero, with the daytime high being only seven degrees. Fahrenheit. Brrr.

So, I'm not just under the weather's height. It's also getting the upper hand.
Posted by Gordon Brooks at 9:43 PM No comments:

A Trip to Florida

As promised, more about our trip to Universal Studios Orlando. 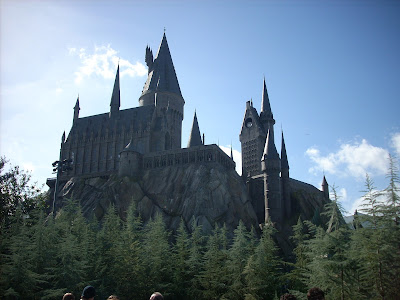 You are looking at Hogwarts Castle, as conceived by the builders of the Wizarding World of Harry Potter at Universal's Islands of Adventure park in Orlando. The pictures don't begin to do it justice. It is breathtaking in both its scope and its detail, as are the buildings in Hogsmeade, through which you walk to get to the castle.
We had a lot of fun at Universal Orlando, and I'm glad we took the boys. My favorite parts were Hogsmeade, especially Olivander's Wand Shop, the Disaster Movie ride at Universal Studios, the ET ride (an old favorite from the Hollywood studio), and the Men In Black Alien Attack ride.
But there are three things I really don't like about Universal Studios Orlando. One is that the layout makes you spend an awful lot of your time and energy walking. It's a very long way from your car to the entrance, and there is no tram. And once you get to the entrance, you have to walk through Citywalk to get to either park. And the parks themselves are laid out in curcles with water in the middle so there's no way to cut across and get somewhere fast.
The second is that (and I'm sure this is not unique to Universal) I'm kind of tired of having to get whipped around and turned upside down just to see the cool stuff there is to see on the rides. I get get a rush by looking at something really amazing; I don't need to pump adrenaline, or get dizzy or sick to my stomach to get a rush. Even the kids' rides sometimes have too much bumping and spinning.
One thing I really loved about Disney's Epcot Center, which I have not seen in a dozen years or more, is how much there was to see, without having to go on a thrill ride. I also have fond memories of the Universal Studios tour in Hollywood, that was just a tour of the backlots and some demonstrations in the sound stages. It's one of the things that made me fall in love with making movies.
And third, and then I'll stop whining, is that Universal seems more bent than even Disney on picking your pockets at every opportunity when you're in the park. The food ranges from very expensive to outrageously expensive. And those of you who've been to Disneyland and used FastPass to move through the lines might be surprised to find out that they have something similar at Universal--but you have to pay for it. Even the very first thing we went to see at the Studio park, which was touted as a magic show, is actually a pitch to sell overpriced magic tricks. In this economy, this may eventually backfire on them.
Okay, rant over. Everyone had a great time. The travel wasn't actually very stressful, thanks to some lucky breaks on the schedule and the good folks at JetBlue, who make flying easier than anyone else we've flown lately. And the boys really enjoyed being able to swim in an outdoor pool in January. 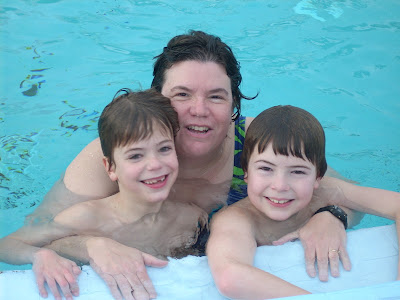 Can't beat those smiles! We also had the special treat of eating at one of only four Sizzler restaurants in the entire state of Florida. We don't even have any in New Hampshire, and we always loved their Malibu Chicken, and the wonderful buffets we used to enjoy at the location in Sunland, California. The Sizzler in Kissimmee did not disappoint.
Now I need to go to bed, because I have to shovel more snow tomorrow. Guess I should try to have some warm Florida dreams tonight.
Posted by Gordon Brooks at 9:41 PM No comments:

This blog and its accompanying site have been suffering a fair bit of neglect over the past month, and for a variety of reasons. Holidays are always busy, of course, and this year I took on the challenge of directing the show that Village Players put on for Wolfeboro's New Year's Eve celebration, "First Night." I don't regret that decision in any way, for it was a great show put on by a magnificent and hard-working cast. But my body decided to have a bad sense of timing.

Two days after Christmas, on the first day of Production week, I managed to get sick with some kind of intestinal virus. It only lasted a day, but then I failed to do all of the things that you're supposed to do after you get sick, like rest, eat right, drink lots of water. I had a show to do, after all.

So by show night I was nearly doubled over with pain. But I managed to do an adequate job of running the lights and sound, while my cast (a director's job is really over once the show is on stage) put on three very energetic shows to three packed houses of appreciative audience members.

I'm better, and I was relatively comfortable during our trip to Florida, which was fun but not restful. But more about Florida later, when I've had a good night or two of sleep. 2011 has started with more of a whimper (or a groan) than a bang for me, but I'm recovering nicely and ready to dive into the fray.

Which tomorrow will involve, as it will for a giant swath of the Northeast, shoveling snow.

Nothing like getting a little rest.
Posted by Gordon Brooks at 7:58 PM No comments: