Labor Day was supposed to be one of Karen's regular days off, but she had to cover the department, and so worked for four hours, which means that today was the first day she's had off since we got back from California. 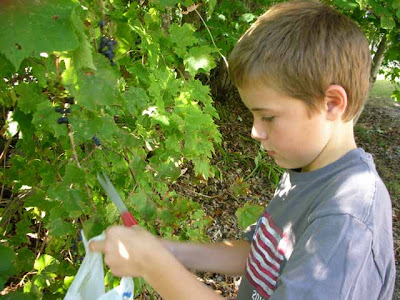 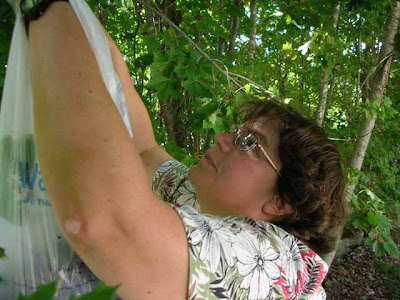 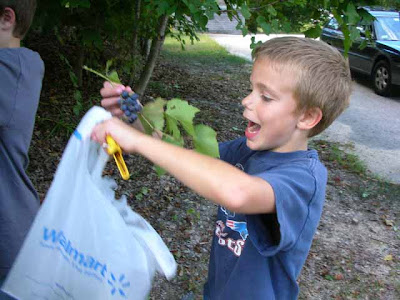 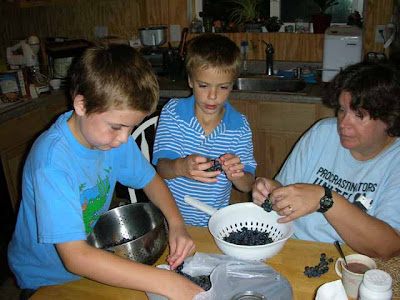 She did find the time, though, to go out and pick grapes with the boys on Monday, and so sometime this month we will be enjoying grape jelly and (my personal favorite) grape syrup. If you've never tasted concord grape syrup on pancakes, you've no idea what you're missing. Of course, until Karen decided to make it for the first time a few years ago, I didn't know either.

This has mostly been a week of trying to establish routines for school, Karen's work, and my search for income, along with the usual household chores including cooking, cleaning and, well, building. It still feels very disorganized, but it's only been about a week since the boys went back to school, so I'm probably expecting too much, too soon.

But then, if I don't come to expect it, it will probably never happen, so I think I should keep my standards high.

I actually have a date with my wife in the morning for a walk in town and breakfast out, so I'm not going to stay up too late.

But I'll do my best to keep you up to date.
Posted by Gordon Brooks at 11:19 PM No comments:

Back in New Hampshire 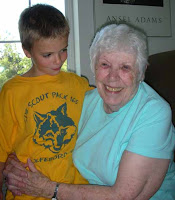 The trip to California was hot, fun, and way too short! The theme of the trip, especially for the first five days, was "beat the heat." Air conditioning, in the houses and the rented car, and lots of water to swim in kept us going until the weekend, when the weather finally broke.

William got a chance to experience something from my childhood, though I never did more than watch, not being much of a swimmer. This waterfall, near the west end of Bass Lake, California, has been a thrill ride for good swimmers for many decades.

Daniel is still too young and inexperienced to ride, but William braved the rocks climb, the walk across the cliff, and the slide down the falls. Many times. Video coming very soon.

Even for us non-swimmers, Bass Lake provided a nice break from the heat. While the temperatures in Fresno and Oakhurst were in the hundreds, Bass Lake was breezy and below 90. We grabbed a picnic lunch at the Pines grocery store consisting of hot dogs for the boys, a burrito for Karen, a roast beef sandwich for me, and a huge fruit salad for us all.

Back down in Fresno, my sister's pool kept the boys cool and very active, which helped them get a good night's sleep after our last day in Fresno.

We also got to do a lot of visiting with my family, all of whom live in Fresno or relatively close by, although we would have loved to spend more time. It's always a rushed visit when you can only come to the state for a little over a week.

Saturday was a visiting day, Sunday a party day for Karen's birthday, and Monday, which was Karen's actual birthday, was Disneyland Day. 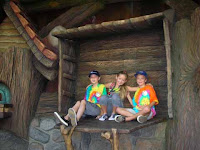 We had the pleasure of being joined by our young friend Madison, who not only enjoyed the park but had a lot of fun with William and Daniel, who only get to see Madison when we come out to California.

The park wasn't too crowded, so we got to go on a lot of our favorite rides, although a couple of them—the Haunted Mansion and Star Tours—were closed for either redress or renovation.

We ended up opening and closing the park, and everyone but me slept on the way back to Burbank. 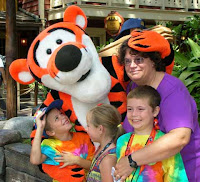 On Tuesday it was time to go. We got in some more visiting time, did a little last-minute packing a shopping (including some snacks for the plane; they don't include meals anymore and the prices are outrageous).
Although the flight from west to east is shorter than the flight out, the trip seemed very long, partly because it was an overnight flight, and partly because it felt like we were going the wrong way. We slept most of the day Wednesday so that we could go back to our regular life out here by Thursday.
Another heat wave greeted us here, but that has now passed and we are starting to think about preparing for winter, even as we are just getting into the routine of a new school year, this time with the two boys going to different schools (though still on the same bus schedule). I am not returning to the National Passport Center, so my routine is, well, anything but routine as I work out how to make a living. But I don't mind; after six years it was time to move on.
Now it's time to move this online and move myself into bed. I'll post more pictures from California on PicasaWeb in the next day or two, and the promised video of William on the falls. Until then, it's good night!
Posted by Gordon Brooks at 10:05 PM No comments: