This morning, before Daniel's annual birthday party at Chuck E. Cheese's, we went to our favorite tree farm in New Durham to cut this year's Christmas tree. It was snowing when we got up. No problem; we cut our tree in the snow all the time.

Most people take great care to keep their trees fresh during the holiday season. So it seems strange that, as I write this, my tree is down in the basement drying out.

Birthday party was fun for the boys, and nice for us because we got to talk to adult friends for a couple of hours with interruptions only when the boys needed more tokens. But right after the party we had to rush home so that I could make rehearsal tonight.

It's still raining. The temperature has climbed to over 50 at this hour. The rain will go away by tomorrow night, but unfortunately so will the warm air. Sigh.
Posted by Gordon Brooks at 10:09 PM No comments:

Staying Behind the Weather

The temperatures have been frigid for the last few days, so we're looking forward to some warming tomorrow and Monday. It will give me a chance to get rid of a few chunks of ice that kept me from reeling up our hose today, and pry a few things off the ground before they freeze to it again, in preparation for snow storms which are not yet on the horizon, but must eventually come to New England. The only catch: I have to do the work in the rain. Weather, as you might expect, is not my best friend right now.

Danny's been feeling a little under the weather, and Tom just informed me that he's got a cold as well, but for the most part we're all holding up very nicely, and looking forward to a holiday season at home. Karen's work schedule and my rehearsal schedule make travel pretty much impossible, but we're not so disappointed and we welcome a chance to relax a little.

I recently updated my Facebook bio, realizing that I still referred to myself as working at the Passport Center. Instead I described myself as "A juggler whose unfinished house, job search, theatrical projects, creative projects, and family projects are always up in the air." When I'm working out my schedule for the week, I sometimes think, "how could I have been crazy enough to take on directing a play at a time like this?" And then I realize that it's always a time like this.

And, of course, when I'm at the theater, watching the actors in my cast working so hard and surprising me so often and making me laugh at jokes I've already heard because they just made them funnier, then I know full well why I'm there no matter how difficult it is to find the time. It's love, pure and simple. My latest cast is no exception, and I expect that the three performances at the end of this whirlwind rehearsal process will be a fantastic way to end the year.

This blog entry will end with less spectacle, as I have to go help Karen in with some groceries.
Posted by Gordon Brooks at 9:01 PM No comments:

Yesterday we took our annual trek to Jefferson, New Hampshire to visit Santa's Village, while the two younger boys are still young enough to enjoy it. They had a lot of fun, but I found it telling that neither of them complained that we didn't have time to wait in line to talk to Santa himself. 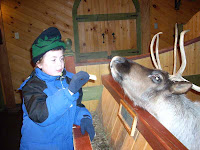 There has been very little snow here in the Lakes Region, but there was a fair amount on the ground in Jefferson, and it was snowing when we arrived and on and off for most of the time we were there. It wasn't enough to chill our enthusiasm, and it certainly wasn't the coldest trip north we've experienced, but it did remind me that winter is fast approaching and I'm not really ready for it. 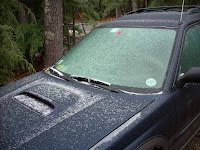 I'll have a few snow-free days in the upcoming week, but as often happens, those will also be the coldest days, with highs only reaching the upper 20s. Brrr. 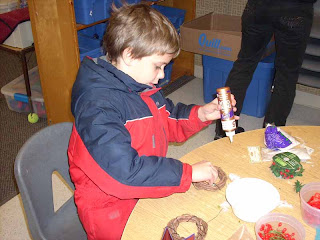 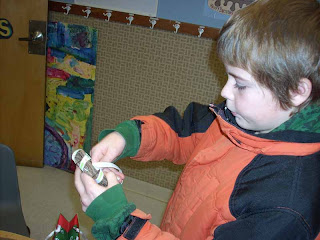 Last week the boys went to a craft-making fair at the children's center they attend one day a week. The contrast between the two boys was interesting. William wanted to make every project, and did so pretty much on his own while I followed Danny around to see how many things I could get him interested in. In the end Danny did pretty much all of the projects, but only after I guided him away from the many distracting toys at the center.

Today we celebrated Danny's 8th birthday, though it actually comes tomorrow. But Karen will be working until close to when the boys should be in bed tomorrow, and Thomas wouldn't have been able to make it at all. As it was, I had to duck out right after dinner for rehearsal. It's getting increasingly hard to get us all at the same place at the same time. But occasionally we get lucky.

Thomas seems to be doing okay, as well as I'd expect a bachelor out on his own for the first time to be doing, especially now when pretty much all of the work out there at entry level is part-time work I keep bugging him to write a blog about it, and I'll provide a link on our front page if he ever does.

Meanwhile I'll keep writing when I can, and trying to get you as many pictures as possible. The time may be hard to find, but at least I'm never at a loss for interesting material.
Posted by Gordon Brooks at 9:30 PM No comments: