Where Does the Time Go?

This blog and the site that accompanies it have been horribly neglected. The pictures of the day have been encore performances for several weeks, and I just noticed that it has been nearly two months since I updated this blog. Don't take it personally, though; my other blogs have been idle for even longer.

I blame it on the company that contracted my employer to hire me to scan standardized tests so that they can be scored. The commute is long, the pay is low, and the work is mind-numbing. And so, the steadily-atrophying organ between my ears has all it can do to keep up with a new play (Almost, Maine, opening at the Village Players on July 29th), carpentry (a bunk bed for Danny), and all of the various tasks that, sort of, keep our family running.

Spring has finally arrived, and so some of the projects that were waiting for warmer and dryer weather can now proceed, if I can actually find the time to do them. The above-mentioned company may accommodate my needs soon by laying me off. Then I will have time to build the deck, trim the door frames, hang drywall, and install the upstairs toilet, among other things. Of course, I won't have any money for any of those projects, but that's life in America today, pretty much. We manage. 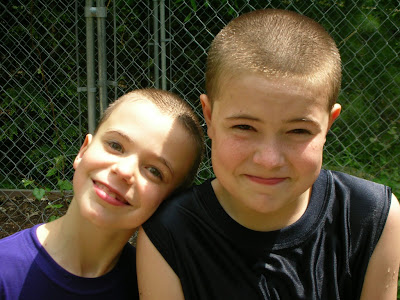 And we have fun. Sure signs that summer vacation is on its way: wet boys with buzz cuts. The boys have 13 weeks of summer vacation this year because of construction at their school district. A little bit hard on parents, but the boys are looking forward to it. 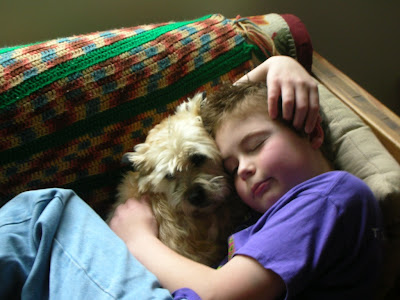 Here is Bonnie cuddling with William on the sofa... 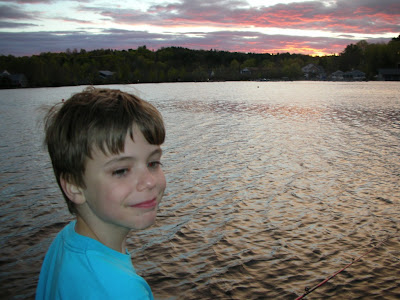 ...and Daniel at sunset during a fishing trip to Back Bay, Wolfeboro, with the Cub Scouts. Danny didn't catch anything, but he was one of the last there, trying. He just needs to have the patience to keep his line in the water!
It will be a busy summer. The boys have writing projects, and each boy is doing a storyboard for a movie to make with me. I'm directing on play and, before that one even opens, I suspect, rehearsing for another, if the directors think I should get a part. And I'm trying to move from being under-employed to self-employed (or, as it is more accurately described, self-unemployed).
I need to get Karen some kind of artistic project, though. So far the best I've been able to do is to rope her into doing a painting for the summer play (following on the heels of the mock Picasos that she and the boys did for my New Year's Eve production). But all that talent shouldn't be sitting idle in a hardware store.
Meanwhile, and I know I keep doing this, I'm going to be making some changes to the Web site again. I won't go into specifics, because I have no idea what they are, and I won't promise new and improved, because I am trying to get into the habit of under-promising and over-delivering. I do know that I want to try to use some of the available online tools to make it easier to keep the site fresh and show all my readers (makes it sounds like I have more than one; I'm not sure that's true) what's happening with the Brooks Bunch.
And I won't have to tell you how it turns out, as long as you stay tuned in.
Posted by Gordon Brooks at 3:33 PM No comments: