It's snowed this morning. With an outside temperature of 40 degrees Fahrenheit, there was no accumulation, but that doesn't change the fact that it snowed. Not a good sign.

Next week is supposed to be rainy and a little bit warmer. A little bit. It's too early for this.

On the other hand, we've been having our share of fun. Of course, I've already mentioned the campout that Karen and William went on with the Scouts. That trip was followed up immediately by William's birthday party at Chuck E. Cheese's, so the Sunday was a whirlwind day, not only for Karen and William but for a couple of William's guest who also came from the campsite.

But nobody was grumpy over it; everybody had a good time at the party.

The following weekend we went down to Keene the see what may be the last Pumpkin Festival. Every year thousands of people bring tens of thousands of carved pumpkins to Keene to put on display. There's food and games and crafts. And then there is the city of Keene to look at, which by itself is worth a trip down. 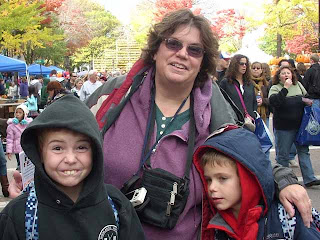 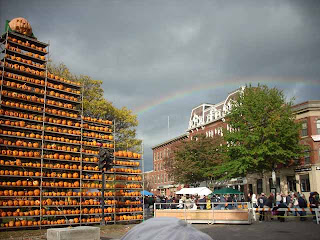 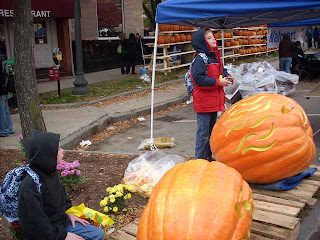 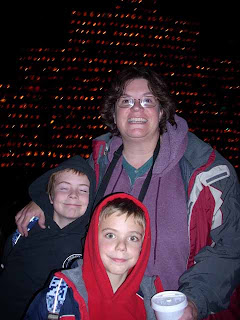 William and I have joined a club at his school, the Book Talk Club. Each month we all read the same book, and then we get together in groups of six to eight, adults and students, to talk about it. The students are mostly 4th through 8th grade, though we have one very precocious first grader, son of one of my fellow thespians, who is a delight to listen to. Last night was our second meeting, and our first discussion, and it was lively and jovial, and we both had a very good time.

Latest news on Thomas is that he is just about to move away from home. He's got a job in North Conway and will moving in with a friend in Ossipee, just south of Conway, starting Monday. We will of course miss Thomas around here, but it's good to see him starting to get out on his own. Maybe I can get him to blog about the experience, and if so I will supply a link on the home page.

Meanwhile, those of you who are Tom's Facebook friends will probably be hearing a lot about it.
Posted by Gordon Brooks at 12:49 AM No comments:

I Left My Wife

Tonight it is just me, Thomas, and Daniel in the house. Karen and William are somewhere in the woods of central New Hampshire. Karen is the only woman there among about a dozen tween-age boys and half a dozen men. It was her idea. No, really!

It is the Weblos Scouts' camping trip, and Karen is the camper in the family, not me, so she decided to join William for the two-night campout. But she had to work today, so I brought William to the site, started the set-up of the tent, and hauled most of what we needed out of my car with a lot of help from my soon-to-be-ten-year-old son.
Karen got stuck in traffic and didn't arrive until 8:30 or so. I left them there, with a steady drizzling (and unpredicted) rain and no cell phone service. But they'll be okay. They have lots of company (it's not just the one pack that's camping, and there's an on-site district leader), and Karen is a well-seasoned camper.
I'll miss the two of them, but with the busy weekend I mentioned in the previous post, it will pass quickly. And the boys have Monday off to recover! Karen, unfortunately, does not.
I think I'd better plan something very special—and very relaxing—for my lovely lady on Sunday night.
Posted by Gordon Brooks at 11:01 PM No comments:

This has been a busy few days in a busy week for the boys. On Sunday we visited a mock encampment in New Durham representing a field recruiting office for the Union in the Civil War. They had tens set up and gentlemen in uniform who talked quite knowledgeably about the conditions at the camp, the food, the state of medicine, the requirements for becoming a Union soldier (essentially having at least one upper and one lower tooth so that you could tear open your powder packet to load your musket). 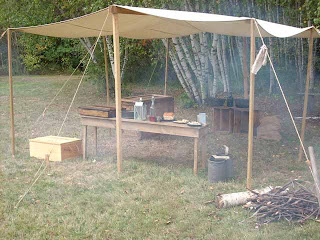 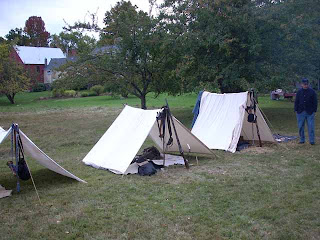 William was interested in the talk, though most interested in watching a young soldier whittling by the fire. Daniel was only interested in running through the open field with a friend that he met there unexpectedly. That is until it was time to visit the bake sale, which interested both of them the most. 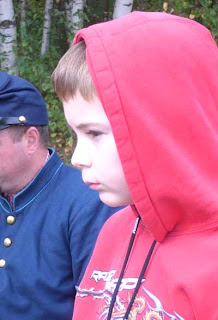 Monday Danny had his first Cub Scout den meeting of the year, followed on Tuesday by the pack meeting. William is going to an extra den meeting tonight to get the low-down on a camping trip he's taking with Karen this weekend. Friday I will take William up to the campground to give Karen time to finish up work, and then I will be without the two of them until Sunday morning.
But it won't be boring, for Danny an I are headed to Wal-Mart on Saturday to help out with popcorn sales. (Yes, folks, it is time for the annual fund-raiser, and yes, we will be hitting you up.) I'm sure Danny and I will find some fun things to do afterwards.
And then William's birthday party is on Sunday (with his actual birthday coming up a few days later—my, how the time does pass). I'm exhausted just thinking about it.
Karen is constantly bringing home software that she finds at the swap shop, a feature of some of the landfills (actually transfer stations, though where they transfer our refuse to is a mystery to me), where people can leave their discards for others to find to keep them out of the landfills.
Anyway, she picked up a disc that seemed to be some kind of educational title about "The Neighborhood," whatever that was. But inside the package was a different disc, a program called Sim Tunes. I literally had to scrub the dirt off the disc (don't tell anyone at my former employer Philips that I actually scrubbed a disc with an abrasive pad), but I got it to install. It's an old program and I had to tweak it to get it running smoothly, but I finally worked it out.
Now, in Sim Tunes, you have these little moving bugs that roam across colored dots. Each bug sounds like a different instrument, and each dot plays a different note. Sounds like something fun for the kids, right?
Well, it is, in fact. But I'm also having a ball, because I keep finding out how musically versatile this fun little program is. I've actually composed a little piece using it. Stay tuned for more.
Oh, and I'll post a link to what I've already composed as soon as I record and upload it.
Posted by Gordon Brooks at 10:16 PM No comments: